My Swede’s good friend asked me why I thought it was important to attend the Democratic National Convention. I got the feeling that he thought it was a bit over the top and didn’t understand a delegate’s roll or why I would travel so far just to wave an American flag.

I answered that it was not only an honor to go and represent Americans living abroad as we cast our votes to nominate President Obama and Vice President Biden to run for a second term, but it was my duty to be active in a political system that for years excluded women and blacks. It was my duty to be vigilant as certain forces move now to enact voter laws that would restrict the participation of many including students, the elderly, the poor and others without ID thought would be acceptable as proof of identity to vote.

I answered that it was my duty to engage Americans overseas and in the US to register and vote against those who would deny you health care, a women’s right to choose about her body, have blocked legislation such at the Jobs Act, or opposed the right of gays to openly serve in the military. The list is long. But my mission is clear: Get Out The Vote! And vote informed. What kind of America do you want?

Ok, My Swede’s friend said. But isn’t it silly to have to nominate a President who is already in office? Silly? Coming together at the convention not only keeps in line with “the rules” of nomination and accepting said nomination, but it gives the Party the chance to show unity, clarity, and showcase was it stands for, and highlight our up and coming leaders. It’s a chance to bring out the Hollywood elite who share our values. It is a chance to bring out the average Americans who have benefited from Obama policies or influenced them.

It was a chance for me to reinforce my beliefs, fuel my enthusiasm, shake hands with the 1st Lady and be a part of history. At this point my Swede’s friend stopped asking questions. He was truly happy for me to have had this experience. No doubt he still thinks we Americans are a bit over the top with the flag waving, campaign button wearing, and passion we bring to the issues. I could see it in his smile. But he could also see my pride and the urgency I feel about this election.

See all of my photos and videos on Pinterest.

Here is what I experience in Charlotte that has me fired up and ready to go: 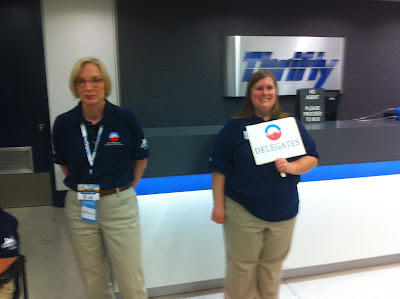 The DNC volunteers were wonderful. They were warm and welcoming and were waiting for me as soon as I deplaned to help me find my way to the shuttle bus to my hotel.

Next came the Welcome Party for Delegates for Democrats Abroad, Kentucky, Indiana,

This gave me the opportunity to meet my fellow Democrats Abroad Delegates. Together we came from 5 continents. I must say that there is no shortage of parties during convention week. No shortage. So one must pick and choose very carefully how much partying one will do because there are breakfast meetings each morning that Delegates must attend. I went with a few of my fellow delegates to the Governor’s Party (that took place each night).

It was a chance to meet other delegates and get watered and fed again.

After breakfast at our budget hotel in the airport zone, our delegation met with Congressman Mike Honda of California in a conference room at the neighboring Marriott.


Lots of delegations were staying there and I think every conference room was being used for breakfast meetings. For example I spotted Rev. Jesse Jackson going into one room and others saw Al Franken roaming the halls.

CarolinaFest was that day which was a hug outdoor family friendly festival with music and food, etc. It was super hot, hot, hot that day and I picked up my blogger credentials, cooled out in the Congressional Black Caucus/Visit Myrtle Beach hospitality

suite at Blackfinns where I had lunch and met up with a member of Democrats Abroad Australia.

I was interviewed by the Philadelphia Tribune and later met up with members of Black Women for Obama at the Westin Hotel. One of the members was a delegate from Massachusetts and she introduced me to Patrick Duval.

That night I had tickets to an event where The Roots were performing but I ended up at the Massachusetts Delegation party before going to the Congressional Black Caucus party which were close to each other. As I said, one has to pick and choose where to go in the evenings, keeping in mind that there are important things to do during the day! Oh, the Democrats Abroad Chair and Vice Chair dropped by the Caucus party along with one of our delegates from Afghanistan.

After breakfast in our meeting room at the neighboring hotel, we got our credentials! Yea!

Credential distribution is the most important thing that happens at the breakfast meetings followed closely by visits from legislators. Today we had a visit from Congressman Rush Holt of New Jersey, another ally of Americans living overseas. His daughter lives in Europe which makes him a perfect voice for us in Washington.

Among our issues that he is working on are FACTA and FABAR.

After breakfast I attended the Unconventional Women: Presented by Political Parity at the Kanvas Gallery 525 East 6th Street #117. Getting there was a huge inconvenience as the direct route was blocked off and I had to walk at least 10 blocks out of the way. In the heat. But I had on sensible shoes. In fact my Converse where my shoes each day with a pair of “dress” shoes in my bag to help me transition from day to night.

On the way over I saw all kinds of police out in force. On bikes,

And on four legs. It was worth the walk, as I arrive Nancy Pelosi was speaking.

but there was some commotion going on caused by right to lifers so I avoided the area. I saw people with DC Statehood t-shirts on walking in the opposite direction and they told me they couldn’t even get to the meeting point. Oh well.

The convention gavel falls at 5pm and so it is wise to get through security by 4.30 to have a good chance to see what’s happening at the convention center before taking your seat on the convention floor.

Long day, eh? After the convention I had planned to go to the Planned Parenthood Action Fund Sex, Politics, and Cocktails Party, but I didn’t. I have to honestly say that I can’t remember what I did that night. It may have been one of the nights when I actually caught the shuttle bus back to the hotel and sat and talked with DAFrance delegate Bob Vallier.

After breakfast and over at our room at The Marriot, we the Deputy Assistant to the President and Counselor for Strategic Engagement to the Senior Advisor, Michael Strautmanis, whose father lives in France come and speak to us.

Before breaking up we took a delegation photo.

After that I went to the African American Caucus at the convention center. There was buzz that Mrs. Obama was going to speak and near hysteria when she actually did. Here is a bit of what she said:

And I thought people were going to faint when she came to greet the attendees. So how do you think I felt when I shook her hand? Like traveling to Charlotte from Stockholm was well worth the trip.

On a high I managed to eat lunch and then attend the Global Women’s Innovation Network’s afternoon tea and champagne reception for Board Members, supporters, and friends to celebrate women’s contributions to technology and innovation policy. That was on the 29th floor of the Bank of America building. After that I hustled over to the Emily’s List reception.

I couldn’t attend the American University Alumni event as is coincided with the opening of the convention at 5pm. On the schedule was:

Wow. What a night. Bill at his best. In his element. I had planned to go to the NARAL Pro-Choice America Convention Reception to end the night but instead went to a party with my DAFrance buddy. We made it back to the hotel on the last shuttle. This may have been the night that we ordered pizza with two other delegates and ended up sharing some with our Co-Chair who came in even later than us.

We didn’t have a speaker scheduled on Thursday morning and were allowed to get to the convention center as soon as possible to attend the caucuses. Again there was buzz that Mrs. Obama would be making personal appearances. So over to the Women’s Caucus I went.

And it’s a good thing I went early because it was packed.

And the place erupted when Mrs. Obama and Mrs. Biden entered and took the stage.

Mrs. Biden spoke briefly and passed the stage over to Mrs. Obama who got us even more fired up.

Then the two of them greeted the crowd and for the second day in a row I was nearly crushed to death as I too eagerly positioned myself to greet the First and now Second Lady too. I’m happy to report that I shook both Mrs. Obama’s and Mrs. Biden’s hands.

I believe you can hear me say, “Thank you Michelle”. Like we’re on a first name basis.
After that excitement I headed over to the Gay, Lesbian, Bi and Transgender Caucus where Mrs. Biden held court.

Mrs. Obama addressed the Hispanic Caucus the previous day. All that was left for me for me to do was eat lunch, regroup and head over to the convention site super early because the President would accept our nomination and I knew I would need to be in my seat early to help fend off people who would try and take our delegations’ seats. And I was right. It was a constant battle.

• Eva Longoria
• Gov. Brian Schweitzer (Montana)
• Former Gov. Charlie Crist, Jr. (Florida)
And we all wondered where this John Kerry was when he was running for President.

After that, we were done! Put a fork in me. But the night wasn’t over, of course. Now we really had cause to celebrate. Nomination accepted. Message heard. Tons of work to be done.

So what better way to finish the week by going to the Urban League/Black Entertainment Network party in the convention center ballroom.

On my way there I met Dr. Eric Dyson. And the night kept getting better. Salt & Pepper (remember them?) took stage and rocked it old school style.

So 2 weeks later I am still fired up and ready to go. I have been doing my best to get out the vote, I’ve requested my absentee ballot, and I’ll tell anyone who listens to do the same.
Thanks again for helping me get to the convention and back. I’ll never forget my time in Charlotte and I’ll never forget your support.